Picking up a new weapon can be a bit intimidating, whether you’re a seasoned hunter or brand new to the shooting and hunting world. I’ve spent the last thirty plus years using a variety of shotguns, rifles, bows and even a muzzleloader or two but I was introduced to handguns a little later in the game when I moved out West to Montana over a decade ago.  I wanted some added protection from not only the four-legged predators share the mountains with me but also the two-legged kind who lurk where you least expect it.

My first handgun was a .40 cal XMD that I carried in my purse or on my hip when hunting or hiking. I decided on the .40 cal because it’s a popular caliber and was readily available at the local gun shop. I enjoyed shooting it at the range but discovered the make and model was a bit bulky for carrying in my purse. I followed up the 40 cal with a 9mm Shield from Smith & Wesson that has become my primary conceal/carry gun. It’s funny, I had always heard that handguns were a lot like tattoos. Once you get ONE you can’t stop. That seems to be the case with my gun collection but I was ‘one and done’ with the ink.

I can remember the day I decided I needed a bit more knock down power, more ‘heat on my hip’ so to speak. We were hunting black bears during the rifle season just outside of Missoula, Montana. This particular mountain range was one of my favorite spots for black bears in the past decade. The trailhead was only a twenty minute car ride from downtown Missoula, where Birkenstocks and tie-dye are more common than camo. After a slow stroll up the logging road we happened upon a pair of mating grizzlies on the opposing ridge approximately 400 yards away!  The intensity of their courtship was incredible to witness in person, a rare once-in-a-lifetime experience. Watch GRIZZLY ENCOUNTER HERE. As grizzly bears extend their range in Montana and other Western states, the chance of having a close encounter increases every year, especially without having a hunting season for them. After that day I decided to carry a Glock 10mm in my hip holster when hunting.

Guns are like relatives. You love them all, some more than others, but they all have differing qualities that you can appreciate. All joking aside, getting into handguns has not only made me feel more comfortable in terms of self protection, but it has also extended my hunting adventures. After taking a hog in Texas with the Glock 10, I decided I wanted to hunt some Western big game animals as well.

In 2019 was introduced to Jodi, marketing manager for Magnum Research, through a friend who had just notched his tag on a mountain lion with the brand new Desert Eagle .429. The .429 DE is a cartridge that was introduced in 2018. The parent cartridge is the .50 AE but simply necked down to .429. It created a 25% increase in velocity and 45% increase of energy over a standard 240 grain, .44 Magnum load. In other words, a beauty and a beast all in one and a perfect handgun for bears and mountain lions.

The Desert Eagle pistol is a Hollywood icon.  It’s been featured in more than 500 movies and tv shows giving it quite the star power in films such as The Matrix, RoboCop, Last Action Hero, Double Impact and hundreds more. I admit it’s not the most practical handgun for my small hands but it’s purpose was different than my other handguns.  This was going to be for hunting big game.

Jodi introduced me to the crew at Outlaw Ordnance, a custom design company that can turn your guns into works of art.  We began email correspondence back and forth, discussing what I wanted laser etched on the DE.  “Well that’s tough to decide.” I said.  I love the U.S. flag of course and mountains would look cool.  Some big game animals like bears, muleys and elk maybe.  I also love fly fishing pike, one of my favorite things to do.”  After realizing I was probably giving them too many ideas I simply told them to surprise me.  When I received the mock up design photos I was blown away.  All of my suggestions were incorporated, making it one of the coolest pistols I’d ever seen! 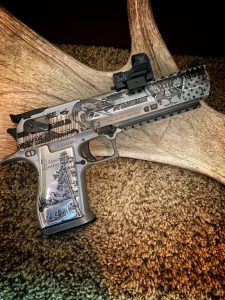 Decked out with the Vortex Optics 3 MOA site, my new DE was ready for the range.  I have to admit I was a little intimidated to fire the first shot but after a few rounds I felt surprisingly comfortable.  Because the pistol is so heavy, the recoil isn’t bad and the holes were grouping nicely at 25 yards with just half a box burned.  There are not a lot of ammo choices for the .429 but the Glacier Ridge 240 grain are fast and powerful, producing 1750 fps energy at the muzzle.

I had been baiting bears with my Skull Bound Chronicles Producer Health Helgert for a few years and I was excited to try and get a nice black bear with a handgun.  There’s something so rewarding about putting the time and effort into every step of the baiting process in hopes of having a nice bruin to hang your tag on.  Baiting is a ton of labor intensive work not to mention time consuming to keep the bait sites freshened. It’s a four or five hour trip to drive over the Montana border into Idaho every time we need to load the barrels.  Bear hunting, whether it’s with baits, hounds or spot & stalk, is a necessary part of wildlife management and so often misunderstood by the general public.  It’s also one of my favorite kinds of episode to produce to shed some light on it’s importance. 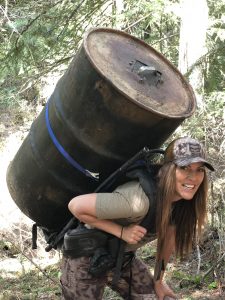 The first few sits in my favorite stand did not go as hoped.  I had bears hitting the bait on the trail camera, even in daylight hours, but they simply weren’t coming in when I was on stand.  They can be finicky at times and there’s a lot of competition with other hunters in the area. A buffet to choose from so to speak.  It’s never a ‘gimme’ simply because you have a bait site filled with yummy expired donuts and stale trail mix.

My boyfriend John was coming up from Utah to bear hunt with me for a few days and enjoy some time in the woods.  We decided to pitch a canvas tent and camp out in the Lochsa forest so we could spend more time in the stand and less time driving back and forth.  John was going to hunt with his new BFR 45/70 revolver but after discovering that he left his ammo on the kitchen counter, using my DE was the only other option.  Luckily he’s shot my gun before and felt comfortable using it on the hunt.

John was up first behind the pistol since he only had a few days to hunt.  Climbing up into the double tree stand set, one of Health’s favorite bait sites, we were both filled with anticipation.  It truly is like Christmas.  You never know what you’re going to get.  New bears can show up on any given day and we had photos of a couple of nice mature boars on camera.  As much as I love spot and stalk bear hunting in Montana, the thick Lochsa forest allows baiting to effectively manage the bear populations and I’ve come to love the entire process.

That first night we had four different bears make an appearance.  One in particular got our blood pumping but after watching the color-phased cinnamon, John decided to wait and see if the bigger black boar would show himself within the next few days.  That’s one nice aspect of baiting bears vs. spot and stalk.  You get to see them up close and personal and judge their size more effectively.  It’s also so fun to watch bears in their element,  displaying their dominance to one another, establishing the pecking order and even fighting on occasion.

After spending the second day refreshing all of our sites, John and I decided to head back to the stand mid afternoon.  Only twenty minutes had gone by after we settled in when one of the younger bears from the previous evening showed up.  We watched him carefully reach into the barrel, looking around in every direction to make sure he wasn’t going to get ambushed by a bigger, stronger dominant bear.  He filled his belly then slowly meandered off into the thick lodgepoles.  Then..suddenly… we couldn’t believe what was about to unfold!…. CLICK HERE TO WATCH WHAT HAPPENS!