Moving out West over a decade ago was one of the best decisions of my life.  Not only is Montana a hunter’s paradise filled with a plethora of big game but her beauty rivals any state in the nation.  Public land opportunities are plentiful but knowing that I would be sharing the land with grizzlies, black bears, wolves and lions lead me pick up my first handgun.  I conceal-carry for two legged predators but hip carry for the 4-legged kind in the backcountry. A few years ago I decided to try my hand at hunting with one.

My first big game animal that I took with a handgun was a Texas hog a few years ago.  A Glock 10mm, my bear country accessory, was my weapon of choice for that hunt but last year I was introduced to the Desert Eagle .429 by Magnum Research. I got the opportunity to design the pistol’s look thanks to Outlaw Ordnance,  a custom engraving shop who turned my DE into a one-of-a-kind work of art.  I decked it out with a Vortex Razor 3MOA site which would withstand the recoil. After taking it to the range it was my goal to hunt black bears and lions with .429, two hunts that offer up close and personal shot opportunities. 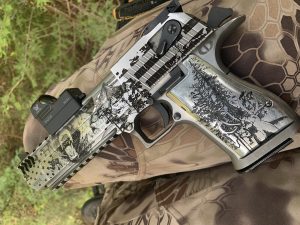 Powerful yet stealthy, lions flow through the landscape like water, with effortless ease. Scaling steep rugged canyons, often through deep snow, is easy for these athletic predators.  When it’s time to attack they hit with the force of a freight train, often suffocating or paralyzing their prey with a strategically placed bite around the face or neck.  Mountain lions, also known as cougars or pumas, are undeniably beautiful but deadly. And in certain areas of the West…overpopulated.

It wasn’t until I moved out West that I began to understand the relationship mountain lions and other predators have on big game.  From wolves and coyotes, to bears and cougars, they all have an important place in the ecosystem but also a direct impact on the wildlife that I enjoy.  I’ve been very fortunate to be involved with some of the local predation studies in the past decade, albeit in a very small way, filming certain aspects of the process like the capturing and collaring of elk cows and calves to study how their mortality rates are affected by winters, disease, predators, hunting and natural causes.  The science behind wildlife management clearly shows the need for human intervention with hunting being an important tool. The idea that nature balances itself out is simply not true, especially given the ever-expanding, industrialized world we live in today. 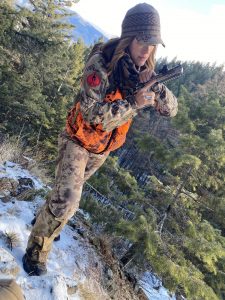 Multiple studies conducted in the past decade by the Fish, Wildlife & Parks (FWP) of Montana have concluded that lion populations have not only been sustainable but they are above carrying capacity of the land in certain areas like the Bitterroot Valley, where I call home.  Capturing and collaring lions, coupled with the newer advances in DNA sampling and special estimation methodologies have made it possible to get a more accurate estimate of the lion populations.  That data helps FWP make annual determinations for tags and quotas.  When there are too many predators it is simple… the elk, mule deer, whitetails and other game suffer.  Mountain lions, on average, kill a big game animal every two weeks which can significantly impact the herds depending on lion densities, especially the recruitment of the calves and fawns which are easy pickins for big, mature cats. Ranchers also struggle with protecting their calves and sheep herds from lions, wolves and other hungry predators.  Some may say “that’s nature” but the reality is that the predator/prey relationship is a complicated one but it’s clear that managing their numbers through hunting is an important component.

I love to feature predator hunts on Skull Bound Chronicles because it offers me an opportunity to educate viewers on the importance of managing their numbers but also show how exciting it is to stare into the eyes of these amazing animals.  Both bear and mountain are delicious table fare, another aspect many people are not aware of.  This particular hunt was also special because my houndsman was a houndsWOMAN, 18 year old Taylor Wohlers.  Taylor is a passionate Montana born hunter who was raised around hard working hounds who live for the chase.  Taylor, the daughter of a good friend of mine,  began raising and working with her own hounds when she was in high school and in these challenging times, where culturally some people judge hunters, Taylor stands tall as a public land hunter and gives me faith that there are young women who will carry the torch and share her passion for hunting with others.

Mountain lion hunting takes place in the winter months and for that reason you’ll want to be prepared with warm, waterproof apparel.  For this particular hunt I choose the Kryptek merino wool base layers, Thea half zip shirt, Ladies Dalibor pants and jacket and the Hera down jacket packed away in my pack for when the adrenaline fades and the shivers set in. Click here to shop Kryptek.